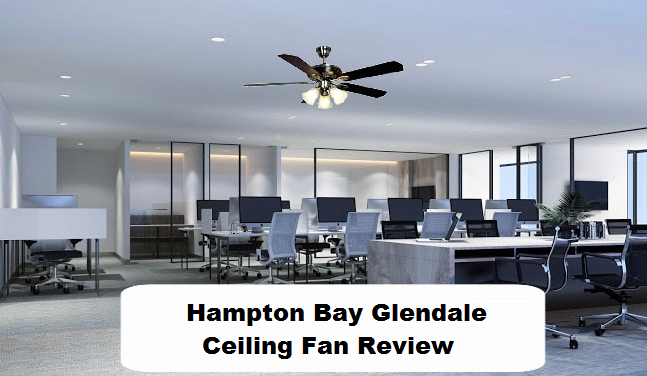 This ceiling fan is replete with a variety of options in colors and blade finishes, if you want a variety of choices for your home, get this unit.

One of the main features one can consider while selecting one of these ceiling fan is the capacity of airflow. Go through the whole article to know about the actual airflow capacity of 42-inch and 52-inch model of Hampton Bay.

Firstly, lets see the dimensions of this ceiling fan, the name of the fan clearly states that it has a width of 52-inch. The length of each fan blade is about 21.2 inches, a width of 5.8 inches. The length of downrod is needed for this fan is about 4.5 inches.

There are some crystal clear differences between the two sizes of Glendale ceiling fan that is, the dimensions of the both.

There is a little difference between the width of fan blades, 5.47 inches with Glendale 42-inch, 5.8 inches in Glendale 54-inch.

This 52-inch Glendale ceiling fan is a low cost fan that is ideal for large rooms.

If you are having trouble while installation then you need to follow this step by step guide below or download the manual at the end of this post.

First of all, copy the UPC number that is available on the motor assembly, you may need to contact the customer service later, in case there is a problem in your ceiling fan. They can solve your problem if you find the UPC number.

The Tri-Mount installation feature of this 52 inch. Hampton Bay Glendale Ceiling Fan enables you to install this fan on multiple types of ceilings.

If you have a sloped ceiling or standard ceiling less than 18, you can use a downrod for the sake of flush mount installation.

If you do not have expertise in installation, you can hire an official electrician to get the job done.

A piece of advice for you if you want to do it, ensure that you have turned off the circuit breaker before you begin.

Tools you need for the installation of Hampton Bay Glendale fan:

Installation of the light kit

How many blades does Glendale fan have?

Does Glendale support incandescent bulb with the unit?

It contains 3 LED light bulbs but you can also install a incandescent bulb that consumes wattage of up to 60.

Can we install Glendale in the Garage?

It is designed for indoor spaces therefore, we do not recommend it. It should not face outdoor elements same in the garage, outdoor fans should be used for outdoor usage such as in garage.

What is the maximum slope of Glendale can accommodate?

The maximum slope or angle that Glendale fan can accommodate is 18°. If the unit is greater than the recommended slope of 18°, you may use the universal slope adaptor.

How to fix a Glendale ceiling fan if it is shaking?

To troubleshoot it, kindly see this helpful post on Hampton Bay troubleshooting to solve the issue.

How much will extra cost if I want a remote for this unit?

You need to buy a universal ceiling fan remote for this unit, but it will not dim the lights of the kit. The light bulbs included in the package are not dimmable. Change the lights to dimmable if you want to dim the lights.

Is the motor of this unit reversible?

Hampton Bay Glendale 42-inch motor comes with a reversible feature whereas Glendale 52-inch does not have a reversible motor, so check this feature before you get the unit.

Is there a plate that I can use to cover the case if I don’t want to use the light kit?

Yes, you can find the cover in our replacement parts options.

Is Glendale ceiling fan is compatible with Bond so I can control it from my Smartphone?

No, both of these units are not compatible with Bond but there is a unit of Glendale 52-inch that uses Wi-Fi remote control that will be functional with Google and Alexa. Prices may vary when the units are available with high tech.

Some of the customers do not like about this unit:

Nevertheless, it is an ideal choice for house owners but the reviews may vary from person to person and their experiences.

We hope that you have made your mind after going through this Hampton Bay Glendale ceiling fan review.

Click the link below to download Glendale 52-inch manual, adobe reader is required to view the manual, if you are using Google Chrome, you may not need it.

Click the link below to download Glendale 42-inch manual, adobe reader is required to view the manual, if you are using Google Chrome, you may not need it.