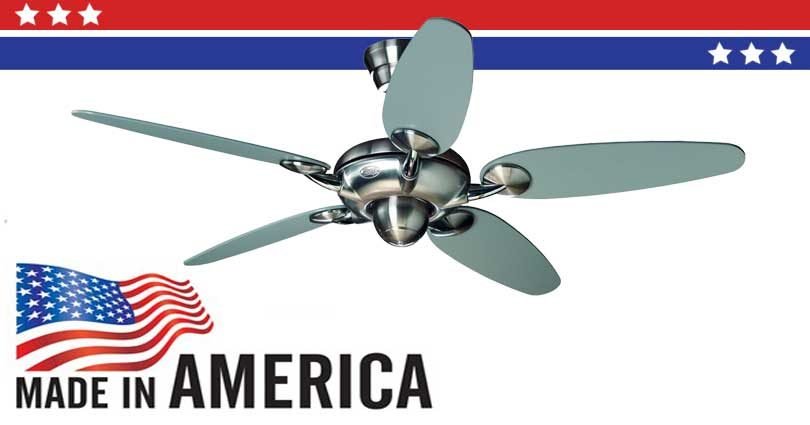 A lot of US citizens give preference buying products from their own country to support the country’s economy as well as their business owners. However, a lot of companies are outsourcing their production of ceiling fans. It is a hard nut to crack to find ceiling fans that were actually made in the USA.

Where Are Most Ceiling Fans Made?

Before we start a discussion on ceiling fans made in the United States of America, it is better to tell you where most ceiling fans are currently made. You may have come to know now that most of the world’s ceiling fans are manufactured and made in China.

Marley Metal engineered products is the last company in the USA which is still making ceiling fans. But they have now stopped making or producing American made ceiling fans. You may find a stock available at distributors, so the post may be relevant in this regard, however, once the stock is finished there will no longer be any ceiling fans made in USA. Please write Marley MEP and ask them about making their US models, the Porch Fan (model 994PF) and Gillespie(model994).

Where can I find American Made ceiling fans?

The most important thing is the design of which it is made instead of where a fan is made. The best quality fans use motors designed and originally made in US including Emerson K55. Generally, they are 18 pole stack type motors which are opposite to 16 pole spinner motors. The vast majority of these motors once produced in America, now being produced in Asia, Mexico and still the design is same.

Casablanca Ceiling fans used to buy US-made K55s now manufacture their own version of it that is, XLP, in their plants overseas.

Emerson ceiling fans still use the K55 however now it is manufactured largely in Mexico. These are still very good quality fans. In addition, these fans are also very costly often costs more than 400$. One who can afford it and pay for it, is worth it. But most of the people cannot have such an amount in their budget to pay, especially when other fans are selling at 100-200$ cost and less.

Hunter ceiling fans are famous for a fan called The Original. Hunter designed this first fan in the early 1900s and continues to produce today. They have made many changes over the years but the fan still looks very much the same, same in look as well as quality. Until 2002, Hunter still made The Original in the USA using the same motor they were using in the very first models. This was a cast iron housing along with a stator filling the full housing, the bearings sitting in an oil reservoir that needed fresh oil periodically.

The result was a powerful fan that is extremely heavy and can operate for decades if maintained properly. Hunter has moved the production of this fan to the same factories as the rest of their fans. They have redesigned the motor rather than building them with the same specifications as the US version. The overseas made Originals still contain the cast iron housing and oil bath bearing system, however, the motor is much smaller (inside the housing) and less powerful. They have changed them from inside but the outside appears the same as the last US models. Usually, they can be identified by a letter ‘A’ following the model number on the box and the motor has ‘made in Taiwan’ mark. The imported Originals are also energy star compliant.

Most of the fan production has been moved out of America and as a result, used American made fans have become more popular and great deal. On eBay, used Casablanca and Hunter Originals sell for quite surprising prices even in poor condition. This is the downfall of eBay that people often have no idea what they will get until it arrives. If the buyer is education, he ends up with a very nice ceiling fan with only minimal repair and work.

There is an alternative to purchasing used. I have discovered a company still making ceiling fans assembled in America. The range of fan selling in the 200$ range. But they offer a few basic designs and finishes but the quality of the fans is good. The equivalent fan of any other company can cost you more than 400$ and still be imported. These fans have a motor that is similar in design to Casablanca XLP and Emerson K55, again, it is manufactured in US not overseas. And to those who do not pay attention to where something is made, you are still getting a much better fan for the money. A 400$ fan for 200$ only and the made is also of US, I think that is the best deal.

Our website is not connected to the company that manufactures these fans in any way nor the retailer who sells them. In my opinion, it is a great deal. Therefore I dislike posting a direct link to purchase them.

Are Any Ceiling Fans Made in USA?

They are no longer any ceiling fans made in America or USA. Virtually all ceiling fans are now made in China.

Now more than ever, people are still searching online for ceiling fans which are made in the USA but that is going on in China now. I am writing this post for your sake to help you in your quest.

The reality is, American Made ceiling fans have become the past. There are simply no longer any ceiling fans that are made in the USA.

So almost all of the ceiling fans which are sold in America or US are either completely or partially manufactured in Taiwan or China. One can differentiate between China and Taiwan because fans that show they are made in Taiwan are lesser quality as compared to those that made in China. That is a fact.

In my opinion, the only ceiling fans sold in the USA which are not partially or completely made in China are featured by Matthews Ceiling fans company.

Matthews fans are made in South America with some parts manufactured or assembled in the USA. People who do not give preference to the items made in China, Matthews ceiling fans are a great alternative for them.

Matthews ceiling fans use motor made by McMillan Electric in Wisconson and it is “Made in the USA”. Other components including blades and motor casing are made in South America with some parts manufactured in Brazil. The controls used in Matthews fans are manufactured by Lutron which claims to be American made. According to Matthews Fan Company, the motor casings, motors and blades are “Assembled in the USA”. It makes Matthews fans a pan-American product.

What about the quality of fans made in China?

These days, most brands of fans have different quality levels within their own brand. Usually, the fans sold at department stores and home centers are of lesser quality as compared to those sold at ceiling fan specialty stores. It is because they use inexpensive components and less quality control which cut down the production cost. Unluckily, these cost savings lead to less reliable products.

There are several ceiling fan companies that are based in USA and help the American market to flourish but they do not make the production of ceiling fans in USA at all.

Here is a list of some fan brands that are doing it:

Name brands that are available on our website will have more high-quality ceiling fans models as compared to lesser brands. So the difference in quality from one brand to another starts with the level of human interaction that one wants to pay for to get consistency every step of the way during production. In addition, the highest quality fans will have more superior parts that are designed to tolerate difficult situations and it makes them more expensive. You get what you pay for and that is the case with ceiling fans.

In a nutshell, we regret that there are no longer any ceiling fans made in the USA but there are several ceiling fan companies that try to go an extra mile to make sure the products they have made in China meet the level of quality that you expect from them.

Where are Harbor Breeze ceiling fans made?

How to reset your Hampton Bay ceiling fan?

How to troubleshoot a Kichler ceiling fan