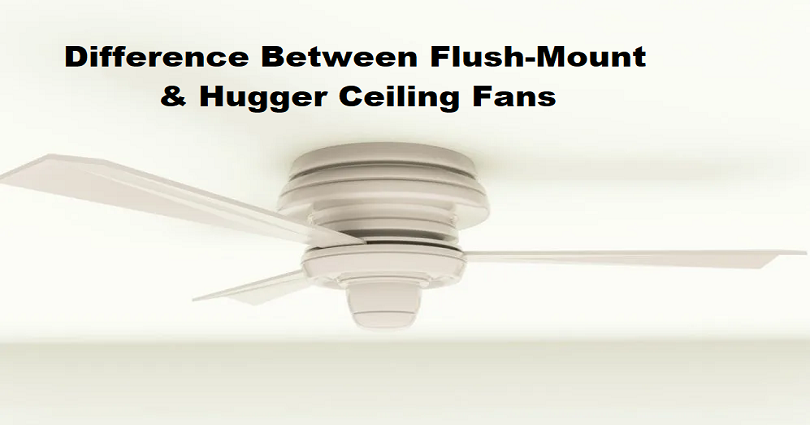 When you search for a ceiling fan, you may be familiar with the terms flush mount or hugger ceiling fan. It may sound weird to you that these terms stand for the same ceiling fan installation style.

Although these words are used to tell the same thing, in this guide, we will discuss some interesting details of the ‘why’ behind using two different names to describe the same thing.

Flush mount and hugger ceiling fans both describe the same installation style fixing the fan directly to the ceiling. Different brands give preference to one term as per their marketing requirement. If a ceiling fan can be used flush or via downrod, it is called a flush mount, while hugger fans are affixed directly.

Flush Mount and Hugger Ceiling Fans Are the Same

A downrod ceiling fan will be an alternative, which can be installed to the ceiling with the help of a tube named as the downrod, that is the reason this style of installation gets its name.

There can be two possible reasons why two different terms are used.

The point of distinction will be considered when you try to install a flush-mount fan on a sloped ceiling.

So, it can be a possible explanation to choose the different terms. However, the manufacturer preference can be another reason, which explains why one brand will focus on one term and another brand gives preference to other.

For instance, Hunter, a popular brand in terms of ceiling fans, has flush mount ceiling fans but if you search for a hugger fan, you will not find a single model because they preferred the flush mount term to use for their fans that sit up against the ceiling.

When you visit their site and search for the term ‘hugger ceiling fans’ and you will get the results for ‘low profile’ fans, which are used by the brands for these types of installation.

Another possibility of the preference of the maker could be the marketing strategy of the company, as the word ‘hugger’ sound relevant and help to bring the understanding of a fan, that it is ideal for small places.

Flush mount or hugger ceiling fans are perfect for rooms with a low ceiling. The reason behind it is that they sit closer to the ceiling, you can still have a ceiling fan installed if you are in the floor clearance measurements that is (at least 7 ft from the floor).

Apart from abiding by the clearances, you will be able to prevent the risk of ceiling fan related injuries in rooms with lower ceilings by using a hugger or flush mount installations.

A lot of homeowners do not give preference to the chandelier look of a downrod installation. Flush mount/hugger fans can be tidier, more minimalistic, and suitable in smaller spaces.

The most important drawback of flush mount or hugger ceiling fans is their limitation of efficiency. As they are so close to the ceiling, they will not be able to deliver as powerful air as compared to downrod fans.

The aim of fans is to collect the air by scooping it and circulate it with the blades and push it down. Flush mount or hugger fans are made with less area above them to accumulate air from, which results in less circulation.

That is the reason why these fans shouldn’t be installed in rooms with high ceilings, as they will not be good enough to fill the space with air.

These fans can make a noise while operating as they are too close to the ceiling and they create turbulence as air bounces between the fan and the ceiling. This turbulence can result in wobbling or at least more vibrations which cause noise.

In addition, the motor can also be noisy due to the inexpensive material used by the manufacturer, consequently, the motor will be less powerful to fight the air turbulence. Less powerful motors can make a lot of noise and will be low in quality too. To get a better understanding of this type of fans, have a look at our guide on Pros and Cons of Flush mount ceiling fans.