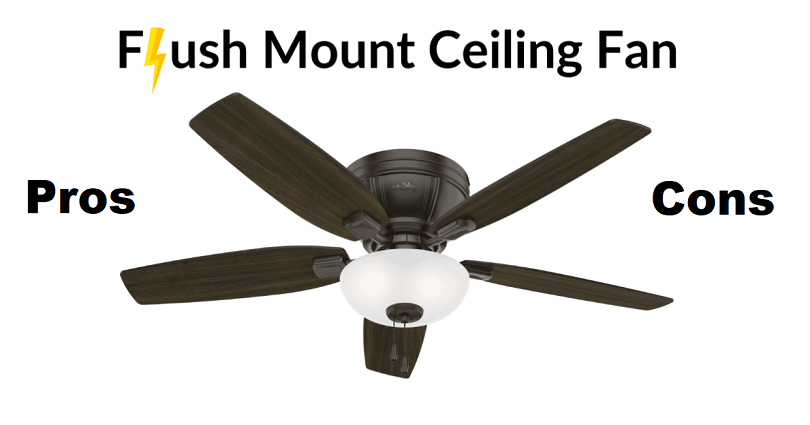 Flush mount fans are designed in different designs and can be a great addition to rooms with lower ceilings or to maintain the spaciousness of a higher ceiling. However, although it may have goods in terms of safety or longevity, it also impacts the effectiveness of the fan and the fan can be noisy and odd too.

They have a Variety of Designs and Features

Choosing a flush mount model for your ceiling does not restrict you from the designs and style or the options that the fan can have. You can still choose designs from minimalistic to rustic, from antique to sleek and modern. You can also opt for a new retractable ceiling fan.

Apart from that, the units are available with the traditional pull switches and remote controlled features, a lighting fixture can also be found if you want to make it visible on your fan too.

The main feature why people consider the flush mount fans is they are ideal for rooms with low ceilings. Clearances are also involved in ceiling fans and when it needs floor clearance, ceiling fans are not allowed to hang within 7 ft of the floor. The blades should be at a length of at least 7 ft or more than that.

Standard mounts come with extra clearance of the ceiling fan with down rods. The reason behind it is that the downrods themselves are around 3-6 inches in standard lengths. It can be an issue with a lower ceiling because increasing the ceiling clearance reduces the clearance of the floor.

It is a hard task to alter the height of your ceiling, but the mount of the fan can be changeable.

Flush mounts can be as near as 6-inch from the ceiling, which adds extra space to get the floor clearance and you will be able to understand the difference, it is safe to install a fan in your room.

It is ideal in areas like lofts which contain low ceilings but the heat is high and it is natural.

A lot of standard model fans also allow a flush mount installation, so you can decide the version you want.

Even if you have a ceiling fan that is capable of a standard mount with a downrod, a flush mount can restrict the ceiling from experiencing lower than it is. Having something installed in the middle of a room’s ceiling can leave no room left for the openness of the area.

If you use a flush mount fan that mounts closer to the ceiling instead of having a fan that is hung in the air space, you can save ample space in a room or even create that sense of spaciousness.

This effect is helpful for a room that contains a tall enough ceiling to install a downrod. In this case, using the standard mount, can cover the whole headspace of the room, you feel like you have to lower your head when under the fan even though it acts in accordance with safety clearances.

Ceiling fans cannot be used under 7 ft above the floor. The aim of this clearance is to provide better functionality and also keep you away from the blades of the fan. You can reduce the safety risks of the fan if you install it higher than expected, simply due to the further distance from the floor.

Ideally, you have to keep your unit between 8 and 9 feet for floor clearance. However, if your ceiling fan offers only a standard mount, or you have a family of taller people, you might consider the spare space that a flush mount unit offers.

If the fan sits higher in the room, you will be more comfortable with it since your arms and hands can touch the blades even though your head is not reaching them.

If you want to use the fan in a room that will also be used for yoga or gym, you might consider the extra few inches to reach your full range of motion easily. The process will also keep little hands and heads safe if you have a game of bedroom trampolines or “the floor is lava”.

The downrod’s length in a standard mount fan is of great importance in how it affects the length of wires required.

You have to pass the wires from the downrod. The task is simple if you are putting the wiring for a standard mount model.

However, it can cause trouble in old constructions that show that you are installing the ceiling fan post-construction or with the changing of old fixtures.

A flush mount ceiling fan needs shorter wires as compared to other mounting options, whether connected to a brace or a stud.

This is useful if the professional electrician or previous homeowner didn’t leave enough wires for the fixture point or if the wires were not in a good condition and required trimming.

Also, if you are uninstalling an old fan and replacing it with a flush mount, it will not be more difficult to keep that type of mount than needing to fix or redo the wires that are not sufficient for a standard mount.

Whatever the mount a ceiling fan use, it should not wobble if it is not imbalanced and properly installed.

If your ceiling fan is wobbling after installation, we highly suggest inspecting that the fixtures and blades are secure. You can also use the balancing kits that are present on market, to find out and inspect issues with a swinging or unstable fan.

However, when we take a look at the practical side of one connection point for a flush mount and two connections for a standard mount (the ceiling and the downrod against just the ceiling), you might conclude that the chances of a flush mount ceiling fan are less to start wobbling when it becomes old.

Ceiling fans require space between the ceiling boards and the blades to deliver airflow around the blades. Ceiling clearances are helpful here. The optimum clearance is from 8-10 inches of distance, but the clearance which is acceptable is 6-14 inches.

Flush mount fans generally get a clearance of ceiling within the range of 6-10”. The only issue is when a fan remains closer to the ceiling, the airflow of the fan is affected.

The less space above the blades, the less productively the air is generated, and the less successfully the fan cool down the room.

Still, the 6-inches clearance of the flush mount fans is acceptable and your unit will still spin, however, it will decrease the effectiveness of your fan.

Ceiling fans are more common in the height of 8-9 ft and they need an extended mount, requiring a longer than a standard downrod.

In tall rooms, a flush mount can make a noticeable impact on whether the fan can deliver air into the room properly to get the cooling experience.

Can Look Weird in Room With High Ceiling

Apart from the greatness of the fan, using a flush mount model in a tall room will impact negatively the room, even it will make the room odd looking. Extended downrods are available in a range of 6-120″ because the fans should be put in an ideal position to provide optimum functionality and style.

If your living room contains vaulted ceilings, installation of a flush mount fan on the ceiling many feet above you will be a strange addition. The fan will not be ideal for the space.

In a tall ceiling room, a flush mount ceiling fan could diminish the beauty of the décor of the room, whatever the actuation design is and you try to make it compatible with the theme.

Ceiling fans generate an unusual noise when there is something wrong with the parts of the model or the wiring. However, there is a difference between the fan making weird noises and being able to hear the fan spinning.

Flush mount fans may be noisier because they are near the ceiling, which can cause the sounds to bounce off or reflect the ceiling. It may result in an increase of the sound of the unit.

The motor of the fan can also potentially cause the noise of the fan.

A flush mount fan motor has to strain to reach sufficient airflow because a motor of this type is less effective than a standard mount. This happens due to the reduced space between the blades and the ceiling. Generally, hard-working motors are louder but are also vulnerable to generating strain-related noises including humming and clicking.