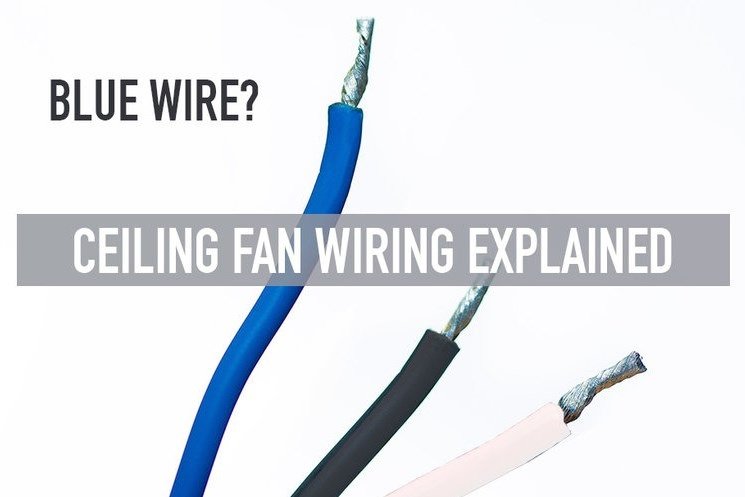 When it comes to wire a new ceiling fan, a number of ceiling fan owners are confused with the single blue wire. It is because the wire does not seem to match with any of the existing ceiling fan wiring. The question arises where does it connect and what is the function of ceiling fan blue wire?

Note: If you are not familiar with electrical work or uncomfortable wiring a ceiling fan by yourself, get a professional for this task.

WHAT IS THE BLUE WIRE ON A CEILING FAN?

The confusion occurs due to the fact that the blue wire is not a standard wall wiring color and that is why it does not have a color-match like white and black wires. Why this ceiling fan wire is blue? It is blue to differentiate it from the black wire that controls the fan.

WHERE DOES THE BLUE WIRE GO ON A CEILING FAN?

The location of the blue wire depends on the controls of switches, whether you want to control your ceiling fan with one or two switches. The black ceiling fan wire will be shared with the switch for single switch ceiling fans. When it comes to two separate wall switches, black and blue ceiling fan wires both will be connected to their own separate switches.

We are going to share a diagram below for both scenarios with a general wiring guide. If you are not familiar with the electric wiring, we advise you to get a electrician.

Ceiling fan wiring of every brand or model will be different, therefore, we suggest using a manual of that specific ceiling fan before installation.

Follow the given diagram below, if your access is only to a single wall switch while installation of the ceiling fan. Note that the black wire is connected to the ceiling fan blue wire to make sure that they can be operated by the same switch.

A dual switch setup enables you to control the fan power and light on separate switches. The blue wire on a ceiling fan is linked to its own power switch instead of sharing a switch unlike the single switch wiring setup above. The basic concept is that each switch feeds either the blue wire from the light kit or the black wire for the fan power.