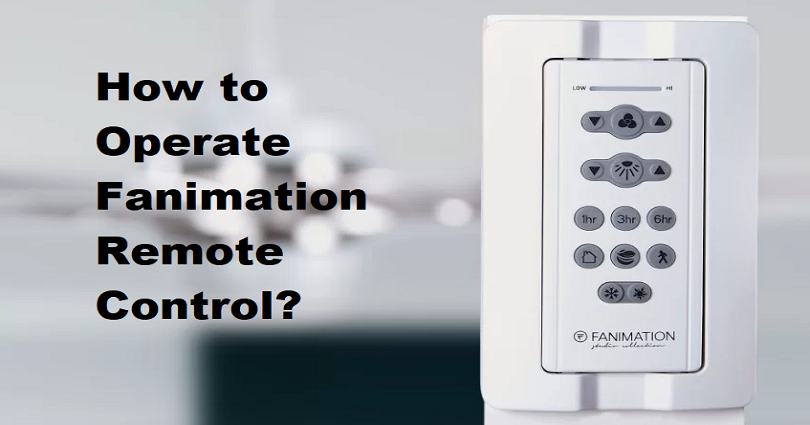 After purchasing a fanimation fan, the remote control comes in the package. You can control the fan from this brand easily and without even touching it.

In short, you can increase the speed, turn on or off the lights or set a timer to switch off the fan and light after a while by using the remote.

But Fanimation fans have a variety of remotes that are different in nature.

So, a lot of users want to know how do you operate a Fanimation remote control?

The ideal way to operate a Fanimation control is to find out the function of every button it has.

For instance, the Fanimation TW206 remote control contains a button displaying a person walking away. The function of this button is to delay the lights.

In short, if you are using the Fanimation TW206 fan in your living room and want to go to your bedroom at night, you can press the walkaway button one time. The light will be turned off after one minute by tapping on the button once.

How to operate a Fanimation remote control

If you want to turn off the lights, the lights can be switched OFF on your Fanimation remote (FP6728 series) by tapping on the button with a circled square.

Fanimation TW206 remote has the same buttons as the Fanimation JY1004 and Fanimation CR500 remote control. That is why their functionality is also the same.

What happens when the ceiling fan won’t turn on with a remote?

If your Fanimation remote control won’t turn on the fan, you need to follow these steps:

After doing the above steps, if the ceiling fan won’t turn on with a remote, replace the remote and try again.

What is the learn button on a Fanimation remote?

Some Fanimation remotes come with a LEARN button inside the compartment of the remote’s battery and these models are the CRL4WH.

This button is very helpful when doing the beginning setup of the fan, especially when setting up the speed.

After completing the installation of the fan, you should restore power to it. After that, you need to open the battery cover and press and hold the LEARN button for 3 seconds with a sharp object.

It will switch OFF the fan and move to medium speed, showing that the learning process is completed. You must press the LEARN button within 1 minute (60 seconds) of restoring power to the unit.

How to reverse fan direction using a Fanimation remote

To reverse the fan direction from a Fanimation remote is very easy. Ideally, it requires the steps of pressing the Summer or Winter buttons from the remote.

However, some Fanimation fan remotes (Fanimation TR29 remote) come with only one reverse button that can do both jobs and it will turn the unit anticlockwise or clockwise.

Your Fanimation fan can be controlled easily with the Fanimation remote. Each button on the remote is made for its specific function. For instance, the buttons can be used to increase or decrease the speed. Also, they can also turn the fan ON or OFF, reverse the unit, and dim or brighten the lights as well.