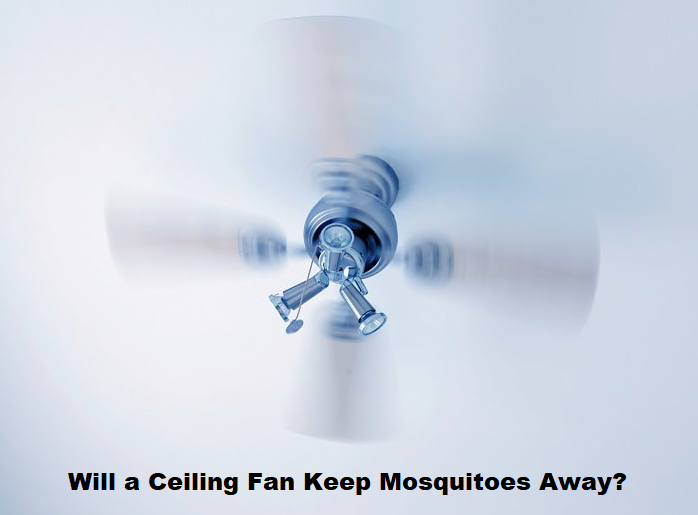 Will your ceiling fan keep mosquitoes away from you? Yes! According to research and studies, electric fans can be used to deter mosquitoes away. Here is how you can do it.

Mosquitoes cause the greatest frustrations in the season of summer. The higher the temperature is, the higher the number of mosquitoes is. You may not notice mosquitoes until you feel itchy bumps on your skin. In addition, you should give preference to avoid mosquitoes before you are bitten by them. And you should know how to avoid them.

Mosquitoes are not very strong flyers and it is hard for them to fly in the strong winds. If you use your ceiling fan at high speed, can rotate the current of wind strong enough to keep mosquitoes away from you.

According to the WHO, more than 40% of the entire population is at risk of mosquito-borne diseases. That is why it is imperative for everyone to educate themselves about the many ways to keep themselves at arm’s length from these little creatures as far as possible. In this article, we are going to discuss how a ceiling fan keeps mosquitoes away from you, in addition, there are some ways to keep yourself away from them.

Why do mosquitoes bite us?

Before we dive into how a ceiling fan keeps the mosquitoes away, let’s have a look at why mosquitoes bite us. To begin with, it is pertinent to say that mosquitoes bite some people more than others. Dr. Jonathan Day, a mosquito expert and medical entomologist from the University of Florida, guides that the skin of some people generates more of some specific chemicals including lactic acids which attract mosquitoes.

The mosquitoes that feed on human blood are female species. However, they do not suck the blood of humans for the sake of their own nutrition. Female mosquitoes need components from the human blood like protein to produce eggs.

The mouthpart of mosquitos is the same as a hypodermic needle, which is called a proboscis. A female mosquito uses its needles to pierce through the skin of humans and investigate it to find a capillary to suck blood. When it locates the capillary, it sucks the bloods that travels to her abdomen to be digested and make eggs.

The dangers and vulnerability linked with mosquitoes and other similar insects

When a female mosquito pierces through your skin and gets your blood, it injects some of its saliva in your bloodstream. The saliva of the mosquito contains an anticoagulant in it, which stops your blood from clotting. However, this is how a mosquito transfers disease into your blood directly.

Even though not every bite from mosquito increases the chances of making you ill, some mosquitoes have dangerous diseases with them. Mosquito-borne diseases result in millions of death every year around the globe.

In 2015, according to Medical News Today, malaria – it is a disease caused by mosquitoes – caused the deaths of more or less 438,000 people worldwide.

Below are the serious diseases that are caused by mosquitoes, these diseases break out in tropical and subtropical regions. The causes of these diseases can be mosquitoes as well as similar insects including ticks, lice, fleas and bed bugs etc.

How your ceiling fan will keep mosquitoes away from you

A ceiling fan is an ideal way to deter mosquitoes away from you. Here is the reason why.

The same is the case with mosquitoes and other flying insects that try to avoid flying in windy places. In addition, research also shows that mosquitoes are not good at flying by nature. Consequently, it does make sense that a ceiling fan can drive them away. In addition, the flight muscles of a mosquito need a lot of nutrients to fly. That is why they consume more energy when flying in windy areas and they will require more nutrients to boost their flying muscles and the requirement will be rapid. That is the reason why mosquitoes and also, other insects do not try to fly in the storm that can cause the use of a lot of their energy.

When a ceiling fan is running and generates air in the surroundings, it tries to keep the area less humid or drier than it will be without a fan. Plenty of users do not observe that the more humid the area is, the more mosquito bites they will get. The reason behind it is that mosquitoes want to act in a moist environment. That is why when you turn on a ceiling fan, it will serve two purposes at once. The windy environment is not suitable for them and they will move to a drier or moister area.

Even though the you can manage your metabolic rate and take it to a moderate level with the help of exercise and diet, you cannot change your metabolism too much. That is why it is better to find ways to drive mosquitoes away from you, whatever your metabolic condition is. One way to deal with it is by using a ceiling fan. A ceiling fan helps to distribute carbon dioxide and other smell of chemicals that attract mosquitoes. Consequently, the mosquitoes will not be able to detect the carbon dioxide and other chemicals to choose their host.

How to choose the right ceiling fan to prevent the mosquitoes

Yes, that is right. It is because there are ceiling fans that do not contain any exposed blades like traditional ceiling fans.

When it comes to choosing a fan to avoid mosquitoes, the end result is, you need a fan that is powerful in generating wind speed and also covers a larger area when moving air.

The real problem is that, when you increase the length of the blades to cover more area, the mass of the blades and their drag will also increase.

That is why you need a ceiling fan that has a very powerful motor. Again, keep in mind – the more the speed of the air, the lesser the number of bites!

Other than using a ceiling fan to keep mosquitoes away, there are many other ways you can use to prevent them. In addition, to make sure maximum effectiveness to keep the mosquitoes away, it is ideal to use other necessary precautions instead of just focusing on one. Below are some of the additional methods that can be used to deter mosquitoes.

Minimize the amount of skin you expose.

When exposure to your skin is minimized, it will also reduce the chances of being noticed by mosquitoes and mosquito bites. That is why it is necessary to cover the body as much as possible. It includes wearing long sleeves, long pants and loose clothes, these are the recommendations that you can wear. You can also wear shoes and socks if possible.

Do not wear dark-colored clothes.

Put on mosquito repellent on your skin that is exposed

If you any uncover areas on your body, you need to apply a mosquito repellent that has 15% DEET. Also, follow the given instructions on the label to use this product in a safe way. A mosquito repellent can save you from the bites of mosquitoes for more or less 90 minutes duration. Avoid using mosquito repellent on your open wounds, broken skin or near your eyes or mouth.

Tip: Put the mosquito repellent by applying it on your hand and rub it on your exposed skin to make sure that you do not breathe it in while using.

Are Ceiling Fans Outdated? Here Are 11 Reasons To Still Install Them