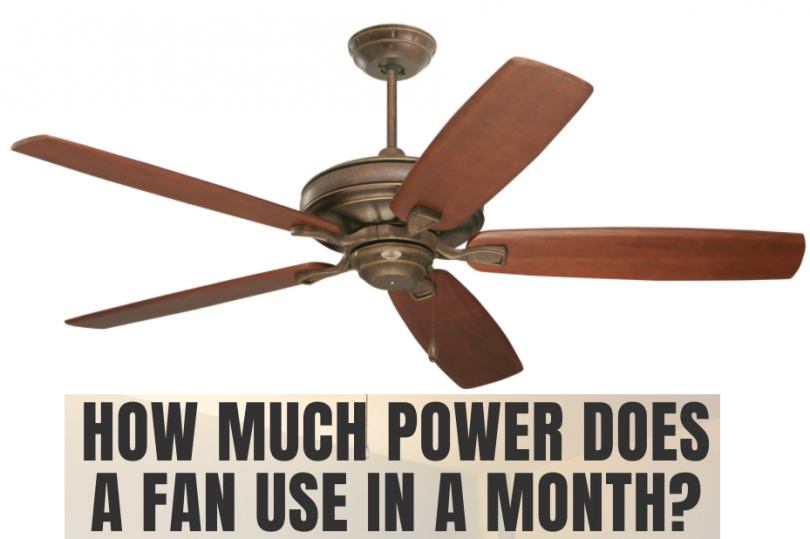 Ceiling fans are a part and parcel of your house, they cool down your place in hot scorching days of summer not costing more than pennies. In this guide, we are going to share how much electricity does your ceiling fan use with additional tips on how to save money while using ceiling fans.

Who doesn’t want to get a cooling air in the hot summer days to get a comfortable sleep or any other activity they want to perform? A number of people buy ceiling fans to calm themselves during the hot summer season. A ceiling fan uses an electric motor that helps the blades to rotate and generate air evenly and make the surroundings cool.

Most ceiling fans use more or less 50-80 watts, and will charge you around $0.006-$0.01 per hour at $0.12 per KWH. The consumption of electricity largely depends on fan speed, efficiency, for how long you use it (duration), and whether you use lights with it or not.

The ceiling fans are energy efficient as well as cost effective way to cool down your place and it is one of the main reason of using this appliance in your home.

In this guide, we will try our best to figure out how much do ceiling fans cost to run, and then calculate the cost by hour, day and month. In the end, we are going to give you some tips on how to save electricity cost while using ceiling fans.

Do ceiling fans use a lot of electricity?

In a nutshell, no, they don’t. In fact, ceiling fans on average consume less than $0.01/hour of energy to function. To quote an example, check Emerson Midway Eco fan, it costs not more than $18.92 at $0.12/KWH if you leave the unit running for an entire year, so as we stated earlier, it costs pennies.

How much electricity does a fan use exactly?

If you want to figure out how much electricity your fan use, the first thing is to know the number of watts your ceiling fan consumes while it is running. The next thing is to find out how many hours you run your unit on average per day. Usually, the ceiling fans use 10-120 watts per hour.

After figuring out the watts being used by the unit, multiply it with the price per kWh electricity that your utility company charges you, this way you will be able to figure out the price per hour of your ceiling fan.

For example, if the ceiling fan is using around 60 watts of electricity and your company charges around $0.12 per kilowatt hour for it, then the following chart will enable you to determine the electricity usage of your fan:

To know how much electricity your ceiling fan uses per hour, the calculation will be performed as follows: 60 watts x $0.12 = 7.2

So, it shows that your ceiling fan will use $0.007 per hour of electricity usage right?

To determine the cost of per day, you need to multiply the cost per hour by the average number of hours you run your ceiling fan. Keeping in view the above calculations, we will do the calculation here:

After calculations, your ceiling fan will cost you $0.056 each day.

If the ceiling fan uses an average 420 watts hours every day, the calculation for the usage of per month will be:

To determine the cost of ceiling fan for one month, how much you will be charged, you need to multiply the total energy usage for a month with the amount you are charged per kilowatt. The math will be done as: 12.6x $0.12 = 1.51

In the end, your ceiling fan will charge you $1.5 every month if you will use it.

Which is cheaper to use: a ceiling fan, an AC, or a combination of both?

Before we begin to talk about the differences between ceiling fans and Air conditioners, we should discuss their functions separately.

The function of a ceiling fan is much simpler as compared with an AC. The electric motor of the fan helps it to rotate the blades and provide air in its surroundings and help people to survive the hot scorching days of summer. The purpose of a ceiling fan is to cool you down by enabling the cooling mechanism of human body, as the sweat evaporates from your skin.

To begin with air conditioner, it is made to do some extra work to provide cool surrounding area. AC uses some chemicals to expel the heat from inside of your room to outside. The chemicals inside it does the job by converting from gas to liquid and back to gas in a rapidly.

Now have a look at the difference between the electricity consumption of an AC and a ceiling fan. To begin, a ceiling fan normally uses 10 to 120 watts whereas the air conditioner generally uses 750 to 3500 watts of power. It means there is a huge difference between AC and fan. It is easy to see which one will be cheaper between the two. In terms of power, the higher the electricity usage, the higher the cost. That is why, it is clear that ceiling fans use less energy as compared with an AC, so ceiling fan is much cheaper choice for you.

To determine the cost in details, a normal ceiling fan will consume more or less 30 watts, on the other hand, AC needs around 1.2 kilowatts of power to function. If you run a ceiling fan for about 3 hours, it will only cost you 1 cent, on the contrary, the air conditioner will consume almost 14 cents per hour keeping in view 1.2 kilowatts of usage. So there is a lot of difference in terms of costs between the two.

That is why, a number of people use a mixture of air conditioner and ceiling fan to cut down the cost of electricity, instead of using them for long period individually they use them together.

In short, a ceiling fan is cheapest to run whereas the AC is the most efficient way to cool down the temperature of the room.

However, running them both at the same time is the most efficient way to cool down your room faster. This way you will be able to enjoy the luxury of maintaining the cooler room temperature while being able to turn up the thermostat a few degrees higher to save money, the ceiling fan will circulate the cool air throughout the place in an even manner.

Here we are going to share some practical tips to save some money even when you are using a ceiling fan:

Check the direction of your fan rotates in: This factor is very important when it comes to saving electricity. The incorrect direction of the fan will cause poor efficiency. You need to set the direction of your ceiling fan in summer season to move the air downwards – usually the settings is anticlockwise on most of the units. Additionally, you need to set the fan clockwise during the winter season to suck up the air beneath the ceiling fan towards the ceiling, the clockwise settings works on most of the units.

Turn off the ceiling fan when you go out of the room: This is an easy one, even though ceiling fans do not consume a lot of energy and does not cost enough money while rotating, why not save more money? If you are not under the fan or no one else is under it, you need to turn off the switch before you leave the room. This method will also save the electricity and cut down your expenses as well.

Get ceiling fans that do not have any lighting fixtures: Even though the ceiling fans that come with a light kit attract you and your guests, but they are not as energy efficient as they are without light kits. However, if you want to install a ceiling fan with a light kit, you need to purchase the fans with LED bulbs – they save energy bill light bulbs. They do not consume enough electricity like traditional incandescent bulbs.

Ceiling fans are not only efficient but also cost effective and they help you to stay cool. As they do not consume much electricity to run, they will cost very little electricity as compared with AC unit.

Keeping in view the above calculations and explanations in the given article, we hope that you have made your mind and get to know enough reasons to install a ceiling fan. It is one of the efficient ways to cool yourself without charging enough money. Still not convinced? Here is another helpful article for you so you can know the maximum reasons for installing a ceiling fan in your house.