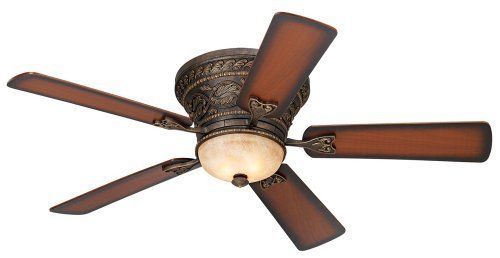 Why do ceiling fans go from high to low? Why don’t they begin from the lowest speed settings and reach the highest speed?

If you have a fan or have ever used one, you might have noticed that the rotation begins with the highest speed level after turning on the switch.

A lot of theories are available about why fans go from OFF to the HIGH-speed setting.

The operation of the fan is included that makes it necessary to start from the highest speed settings for the sake of convenience.

In this guide, we are going to have a look at why fans go from Off to High and then lower speeds. We will also check whether it is practical and also examine whether there are various modes of operation.

Why is the high setting first on fans?

Here is the list of multiple reasons why most fans go from off to the highest speed setting:

Reason 1. Some fans might not start on a low-speed setting

One of the major theories that are taken into account in terms of speed settings of the fan is the high current requirement for the motor to start properly.

In some units, especially the ones with heavy blades, the low-speed setting will not be good enough to supply the appropriate amount of current to start the rotation of the motor, resulting in halt.

That is why it is practical to start with the high-speed setting, which gives away the proper current flow.

Once the motor starts, the requirement of the current to keep it rotating decreases, it means that you can lower the speed levels without stalling it.

Reason 2. Low resistance in low-speed settings can fry the fan

Once the motor begins to rotate, it generates a back EMF, creating resistance. The higher the speed is, the more the back EMF will be, therefore, the higher the resistance.

You are familiar with that the motors begin with a high current to get over the stationary position. However, the current spike can also fry the fan because of the low resistance.

The highest speed setting while turning OFF ensures a high resistance which prevents the parts from frying.

Reason 3. It is more convenient to go from OFF to High

Another theory telling why fans go from OFF then HIGH to LOW is related to the convenience. First of all, the motor gets a high current flow immediately after turning ON.

That is why it is ideal to use the current flow by positioning the highest speed level first.

Secondly, most people prefer only the highest speed levels due to hot areas. So, it is a simple act to go directly from OFF to HIGH while turning on and then HIGH to OFF when turning off.

Should ceiling fans be started on high?

A lot of theories about why fans start on HIGH are available, and they all have good points. However, most of these theories are depend on the function of older fan models, and the things have changed over the years.

In this age, the ceiling fans are equipped with lighter blades that do not need much current to get over the load issue to start.

Modern circuits also have the capacity to get rid of the resistance issue. The parts are very hard to fry as well.

Some fans are designed with buttons and remotes for the sake of convenience. They can start on any speed level. That is why most units start rotating at high speed, it is not necessary that they should.

Fans start rotating from OFF to HIGH then lower speed setting is not uncommon. There are many good reasons why manufacturers are willing to do it. But, keeping in view the latest technologies, this seems like to remain in the trend. However, this act will be no longer helpful for fan that cannot start on any speed setting.