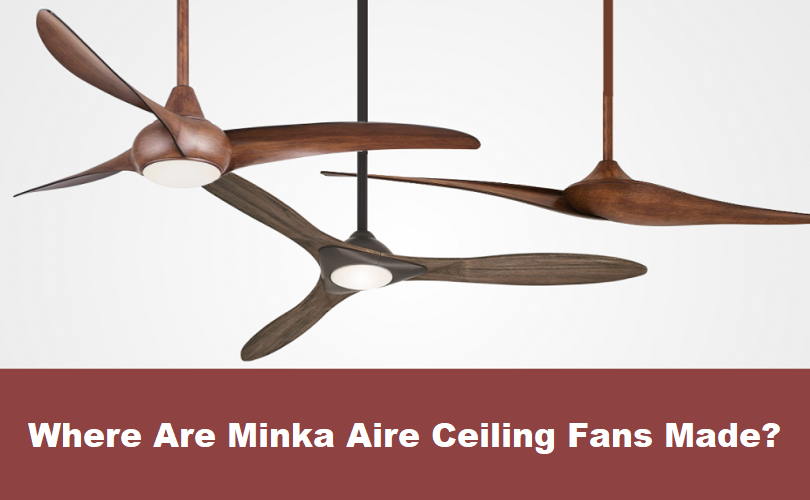 If you are looking for a new ceiling fan, you may be familiar that finding an affordable ceiling fan made in the USA is a hard nut to crack. However, a lot of ceiling fan manufacturers are situated in America but most of them do not produce their items there.

So, let’s find out whether Minka Aire is also manufacturing overseas or they are entirely based in America.

In short, Minka Aire ceiling fans are made for the American market but they are not made in the USA now. They are designing their fans mainly in Taiwan and Hong Kong and other locations in China.

Minka Aire is part of the Minka Group, which produces and distributes ceiling fans as well as lighting fixtures throughout the USA.

Minka Group originated in 1939 but became a corporation in 1982.

The company feels proud to distribute its production around America in the competitive market of different brands. The brand names they are operating are Minka-Aire, Minka Lavery, Ambience, George Kovacs, The Great Outdoors, and Metropolitan.

Where is Minka Aire Based?

Minka Aire is an expert in indoor and outdoor ceiling fans. The aim of the company is to find the best solutions for its American customers; it has even designed wireless fans for them.

The website of the company says that the products they design are:

” . . . designed for the United States and its electrical requirements.”

That is why it is easy to install a Minka Aire ceiling fan for any American.

Another factor you may consider is the size of your fan blades because the size depends on the size of your room. You will get a lot of recommendations for a fan that would match your home décor as well as room.

This process will help you to get the right fan to make sure that you get the appropriate amount of airflow. If you are looking for a new ceiling fan, you can check our list of the best Minka Aire fans here.

Are Minka Aire Ceiling Fans Made in the USA?

After doing a lot of research, we came to know that like most ceiling fan brands in the US, Minka Aire also makes its fans abroad. Most of their production is manufactured in Taiwan and in Hong Kong and other parts of China. Like other big ceiling fan brands including Honeywell and Hunter, Minka Aire designs its products in China to become a solid competitor in the market by decreasing the cost of production and ultimately making affordable products.

How much electricity does a ceiling fan use?