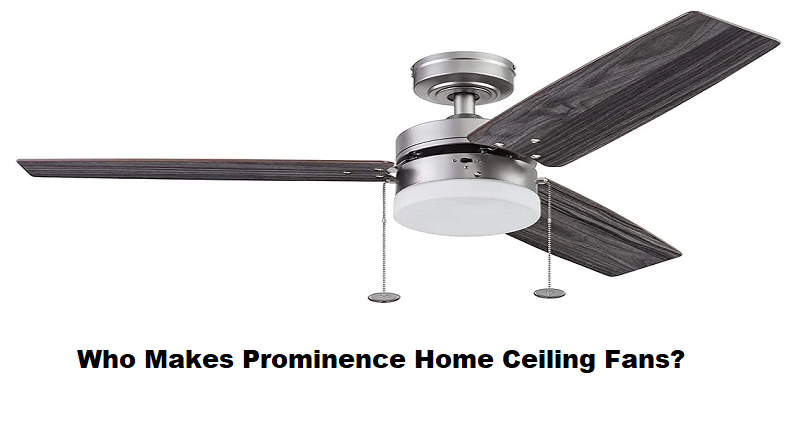 A lot of house owners select Prominence Home ceiling fans due to their unique design and advanced options.

For instance, the company’s 52″ Ashby ceiling fan has a touch of sophistication along with a sleek champagne finish and contemporary style for modern spaces.

In addition, the units come with remote control and dual-finish reversible blades.

Prominence Home fan can be suitable for all types of spaces including dining rooms, bedrooms and living rooms, etc.

The company is replete with a range of ceiling fans covered by a limited lifetime warranty. the fans can be selected keeping in view the number of blades including 3, 4 and 5.

Additionally, you can choose a fan by its features (for instance, no light or low profile), style options (coastal, contemporary, or farmhouse), or by space or area including (living room, bedroom, home office, or outdoor use).

While the company is making some of the best ceiling fans for the market, did you ever curious to know who makes Prominence Home ceiling fans?

Prominence Home ceiling fans are not made in the United States. The company uses a consortium from China to produce its items.

However, the assembling of the ceiling fans is done in the USA and after that, they are shipped to the headquarters.

Where does Prominence Home ship its ceilings from?

Prominence Home does have a warehouse in the USA.

The shipping of the fans is done from the Mid-South warehouse.

In addition, it offers free shipping for the continental 48 United States. However, a special shipping program can be provided to Hawaii and Alaska users.

After purchasing a fan, the company will ship it to you within 24-48 hours during business days.

Is Prominence a good fan brand?

Prominence is a good fan brand keeping in view the ceiling fans the company sells. The company has high-quality fans with a lot of designs and features.

Furthermore, it also offers better shipping and returns policies for its products.

Every fan that is bought from Prominence has a limited lifetime warranty. But you need to return a fan within 30 days of the initial purchase.

What are the best ceiling fans from Prominence Home?

The best of them include:

The price of Prominence Home ceiling fans ranges from $64.99 for the 42″ Alvina to $349.99 for the 62″ Guyanna Espresso ceiling fan along with a remote control option.

There are two ways of contacting Prominence Home company for your queries. Firstly, you can contact them on their official email at hello@prominencehome.com or contact their customer services by calling (877) 217-4481.

On the other hand, you can go to the company’s website and visit its contact page, where a contact form is available. Fill in the form to get additional help.

The making of the fan is done through the consortium of the company in China.