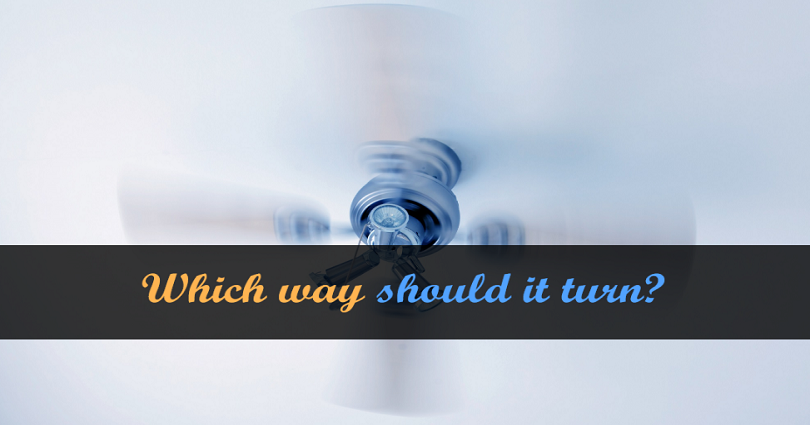 A lot of users are confused when it comes to dealing with the proper rotation direction. Go through this helpful guide on ceiling fan direction for summer and winter to master the concept.

A ceiling fan that was once considered a mere home appliance that would hang from the ceiling and continually keep on rotating for hours has become a modern piece of equipment that is ahead of its predecessors in the matter of both aesthetics and functionality. In past, the only task that they used to perform was to provide comfortable air in the summer season. But today’s ceiling fan’s features are beyond that, it is happening because of the innovation that are introduced in the standard modern ceiling fans, to cater to the needs of modern users.

The “reverse function” is one of those features. This is a helpful feature that helps the fan to spin in either direction as per your preference. And most modern-day ceiling fans are designed with this feature and they have built into them. However, a lot of users are confused with this feature, especially who are not familiar with tech. that is the reason, we are going to focus on this feature in detail in this guide.

One might think, why change the direction of the ceiling fan? I am happy with its cooling air during the hot scorching days of summer. It is good enough for them. Then why try to change the direction? If you are wondering about it, we have two answers for you – comfort and efficiency. Let’s dive into the details of them below.

It is applicable in the winter months. When you keep your fireplace or heater on to avoid the coldness of the winter, a ceiling fan is a great addition to add comfort to your body in such conditions. You might have read about it in high school that the hot air rises. Similarly, it happens here too. Your hot air that is required, unluckily, goes up and gathers near your ceiling, and you shiver from cold. To resolve this problem, you can get help from a reversible ceiling fan. you need to run the fan in the opposite direction, and it will push the hot air down toward the floor and pull the cold air from below. Consequently, you will experience a good flow of hot air which will be comfortable for you.

The tip is that you can only do it with the help of a reversible fan because of its ability to generate airflow upward. When the fan pushes the air down, that is the opposite case, it will give you a cooling experience. So, a reversible ceiling fan in the winter will make you peaceful in this season too.

Another good side of using a reversible ceiling fan is that it can cut your energy costs. This benefit can be achieved in both the summer and winter seasons. As everyone knows, air conditioners in the summer months and heaters in the cold months are must-have appliances. However, these companions use a lot of energy to work, much more than a ceiling fan consumes. Most of times about 15-20 times more. Just think that if you could reduce some of the electricity usage with the help of a fan. It will be like catching a big fish using a tiny bait right?

The good news is, ceiling fans do exactly that! Want to know how?

You can leave your ceiling fan on with your air conditioner in the summer months. Due to this, you will get “windchill effect” and it happens because of the downward airflow from the ceiling fan. It will also help you to increase your thermostat a few degrees because you will be good with little hot temperature. In return, you will save the cost of electricity.

You can also reduce the energy bill in the winter season by using your ceiling fan. you can leave your ceiling fan on at low speed in the reverse direction with your heater or fireplace. The upward airflow will push the hot air near the ceiling to send it to the floor as we already discussed. That is why you need to slow down your thermostat a few degrees, saving the cost of energy bills.

How to Change Ceiling Fan Direction

Most modern ceiling fans do have a switch dedicated for it available somewhere on the motor housing or inside the globe that helps you to reverse the rotation or direction of the fan. You can also go through the manufacturer’s guide to determine where exactly is the reverse switch of your unit. if your ceiling fan has a handheld remote, you can also examine it to find out if there is a button for this purpose. At times, it is available on the remote. You can watch the video below to know about it.

Which Way Is Clockwise on A Ceiling Fan

This is the point where a lot of people get confused. It is not necessary because the term itself explains itself.

Still, if you are not able to find out, follow me:

In this modern age, most ceiling fans usually rotate “counter-clockwise” and push air down. To pull air up, you need to reverse the direction to “clockwise”.

Which Way Should a Ceiling Fan Turn in The Summer?

After reaching this part of the guide, you should be familiar with which way to set your ceiling fan to turn in the summer. Still, if you want us to tell you, set the direction to counterclockwise. Also known as normal direction. This is the setting that can be used with AC. On this setting, the fan pushes the air down, and you will get a refreshing natural outdoor breeze, but inside your home. And if you have installed a ceiling fan as well as an air conditioner, you will be able to increase your thermostat a few degrees, saving electricity usage.

Which Way Should a Ceiling Fan Turn in The Winter?

You need to turn your ceiling fan in to “clockwise” direction in the winter months, opposite to the summer direction. This ceiling fan direction is compatible with a heater or fireplace. By turning your fan this way, it will pull cool air up and push hot air from the ceiling toward the floor. As a result, there will be a good circulation of hot air inside your room, enabling you to decrease thermostats a few degrees, saving cost of energy. The main reason for changing the direction is to prevent the “windchill effect” due to the downward airflow.

However, just remember that this only happens when there is heat generation going on with your ceiling fan whether it is an electric heater, or a fireplace or something else. If you are not generating heat in your room, the advantages of using a ceiling fan in the winter season, in that case, will be none.

What Direction Ceiling Fan to Cool

If you want to get a cooling experience with the comforting breeze, you need to keep your ceiling fan spinning in the counter-clockwise direction. You should remember that ceiling fans actually do not cool down the temperature of your space. Their function is to circulate the air in the room which allows you to experience cooler. The same experience you can get from a natural breeze under the shade of a tree on a sunny day is also called the “windchill effect”.

What to do next?

Get a cool-looking ceiling fan for your home if you do not have a fan with a reversible feature.

You can check our ceiling fan suggestions from Kichler, Hunter, and Minka Aire.