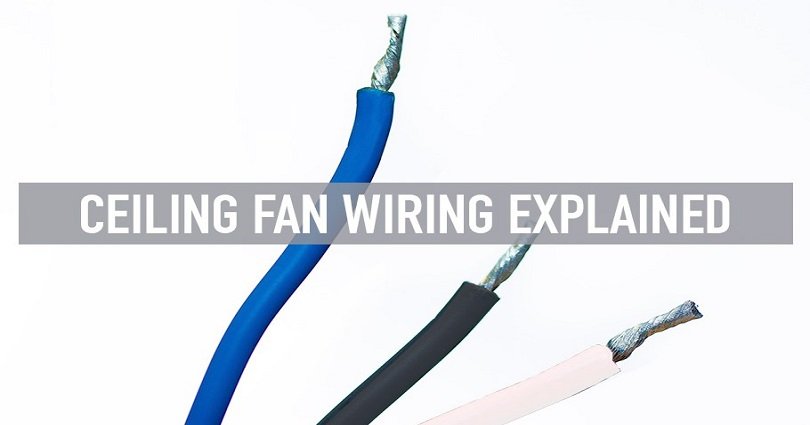 Ceiling fans are adaptable electrical fixtures that can add cool air, lighting, and also provide warm air in a place like a bedroom, kitchen, or office. They are easy to install it is because most of them come with a user manual to get all the information. Before you get started, you need to go through the safety rules and understand the different types of ceiling fan wire colors code.

All wires that are in a ceiling fan have a specific function, each enables the ceiling fan to work smoothly and makes sure safety. It may be a challenging task to perform when it comes to wiring a ceiling fan, at times, it depends on the type of ceiling fan you buy or how it will work. Understanding the wire colors of a ceiling fan makes things easier for you.

The most advanced ceiling fans from the different brands are designed with up to four wires. You can also get the ones with fix or six wires, keeping in view the task of the unit.

The four ceiling fan wire colors and their functions are:

The white wire is a neutral one that performs the function of completing an electrical circuit for a household ceiling fan.

While installation of the item, connect the white wire to an earth ground or any other neutral wire in the electrical wiring of your home.

It is a live wire that can be used as the power feed for the outlet of the fan or power feet. The wire can be used in a circuit breaker as the switch leg.

It is the primary connection that offers current from the switch to the electrical load or motor of the ceiling fan.

You may see a red wire while wiring a ceiling fan with other wires. The purpose of red color wire on ceiling fans is to power the lights. It is a hot wire that comes from the ceiling and engages with a wall switch. It works as a conductor to transmit power to the lighting kit when it is in your device.

The wire can be green or copper in color, it depends on your ceiling fan. The color indicates that it is a ground wire and the function of this wire to keep the device safe from undergoing power surges.

In addition, do not use it as the neutral wire despite connecting to the same bus at the same panel.

You need to know that some of the ceiling fans also have a blue wire. Use it for the light if you are installing a ceiling fan with lights.

How to Install a pre-wired Ceiling Fan with Several wires

The first step to install a ceiling fan is to have an idea about the wire colors, as given above. It also includes the ceiling fan speed wire colors. After doing so follow these steps:

After engaging all the wires, push them back in the bracket and put the faceplate up. Make sure to go through the manual and follow it if you want to wire a ceiling fan with light with 3-way switch.

Wiring your ceiling fan made easy!